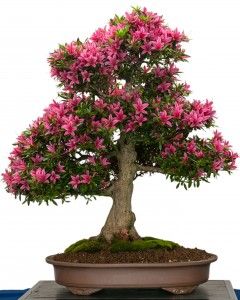 Satsuki Azalea bonsai are one of the most sought after species of indoor bonsai regularly available.  These miniature Azalea plants are gorgeous when grown as bonsai.  They produce a large amount of beautiful flowers and are eye catching when in full bloom.  They typically bloom in late spring and are available in any flower color.  Azalea bonsai grow smaller leaves then most trees, making them the perfect choice for a bonsai.

Azaleas do not do well with dry soil.  They need to have moist soil at all times, so checking daily is crucial.  Dry roots sill shrivel up and die very quickly, leaving you with a dead plant.  Azaleas do not like lime, so use lime-free tap water or rainwater whenever possible.

Placement of your Azalea Bonsai

This species enjoys well lit areas that are sheltered from direct sunlight.  They can do well in partial sun if needed, but ensure that the midday sun is filtered.  This tree performs best in diffused light or partially shady locations,  which are ideal for producing flowers and keeping a Satsuki Azalea healthy.

When wiring your Azalea bonsai, you should use aluminum wire instead of copper.  Aluminum wire, with is softer than copper, was specifically designed to training Azalea bonsai due to their brittle branches and soft bark.  Wire this miniature tree in November, after the growing season has ended.  This species is typically trained into a semi-cascade, windswept, slanting, or informal upright style.

Satsuki Azalea bonsai prefer acidic soils, so using extra peat moss is advised.  Peat moss also helps retain water while still allowing air to reach the roots.  The best time to repot this type of tree is before you see the tree flower.  You can trim a substantial amount of the feeder roots from an azalea.  Do not prune the less prevalent thicker tap roots.  Repotting can also be done later in the season, just make sure to pluck all flowers; you want the tree concentrating on recovery instead of growing flowers.

Satsuki Azalea bonsai prefer an acidic fertilizer that does not include lime.  Fertilize this bonsai every other week in the spring.  Stop feeding fertilizer while the tree is flowering.  If you forget to stop, new leaves will overpower the flowers.  In the late summer and early fall, switch to a monthly feeding of high phosphor fertilizer.